Specialists of this job describe bigger screen phones as ‘phablet’. If we define such smartphones as tablets, the market for tablet computers continues to grow up. 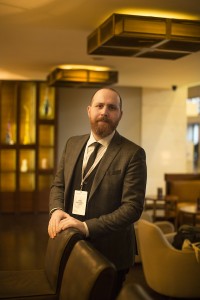 In UXIstanbul Conference 2016 in Istanbul, we had a very pleasant interview on user experience with Executive Partner of UX Services, Barış Sarialioglu.

What is the primary rating criteria of user experience?

I would like to evaluate it on Maslow’s hierarchy of needs. The first level is the air; we need to breathe. If we assess it on product base, we can call it functionality. The product should run according to its purpose. Maslow mentions the need of shelter for the second level. The shelter is equivalent to security at product side. The third step is love which means that the product should be attractive and useful.

Could you please give some information about UX Report Turkey – User-Experience -Report?

UX processes significantly recent years in Turkey, but there is not a reinforced study made at UX side about what kind of investments are being made and determining targets. At this point, UX Reports is the first in Turkey. The aim of this report is to be a document sector independent for the ones who cares about users experience concept. Approximately hundred firms and thousand employees participated the work. UX Report, which was published in Turkish, also will be available to download in English digitally very soon.

According to UX Report, what could you tell us about the situation in Turkey comparing to other countries?

Abroad is a slightly wider perspective. So let’s strengthen a little and call western countries. And at that point of view, one of the most civilized countries is the USA. England, Germany, and France come after the USA. Comparing with these countries, Turkey has a long way to go. However, if we appraise this as an area that we are in as East Europe, Caucasus, and the Middle East, we can call that Turkey is the best country both with its potential and the largest market share with its position. Turkey has come to this point in the last three years.

What are the factors that are affecting the gained momentum at UX field of Turkey?

Effects on strengthening Turkey’s position are the mobile world, big data, and cloud technology so briefly we can say digitalization. In Turkey, information technologies have become backbone almost in all sectors. Five years ago, some companies did not use the digital world; even they did not believe the positive results of digitalization. Now the situation has become to a very different point. First time in Turkey, the amount of data used in mobile devices are more than the amount of data via computer in 2015 and from now on mobile data will continue to increase.

In the report that you defined the status of the country is ‘interested – related’ caught my attention. Could you also give us information about this?

Sometimes people can fill survey very optimistic. Those can describe themselves as ‘engaged – dedicated’ with doing project. You cannot express yourself as just doing one project. It should be permanent. So, we, the companies can understand UX and we join conferences and training that related to UX. We are interested in the concept. However, now, this interest has not been translated to investment. Ten people think on the idea, but just one or two of them invest. Therefore, as UX market, we remain far below of our potential. As an example, Netherlands –population is just up to Istanbul- is at a very high level in this sector.

Could you describe us the upper limit of ‘interested – related’?

The top limit of interested is ‘’invested – investor’’. The company at investor levels makes an investment in this field and employs somebody or gets support from a professional company in this area. From passing this level to ‘’committed-contractor’’ level is needed to be permanency. At contractor level, now, you invest within certain levels and annual plans. At dedicated level, companies are becoming to watch the return of their investments. Therefore, companies make more investments at dedicated level.

Coming to embedded level, these companies start users experience study with no existing product and dialog to the user. This process has been continued until the product exists. Studies on complaints after product exists are related studies. Companies that works on these can be described as investor or contractor, but this investment should be implemented in whole processes.

According to researchers, the number of tablet computers decreases against smartphones. Now could you say that tablets are out of this race?

Now, could we say that devices can decide instead of us?

Questions like ‘if intelligent devices are smarter than us or not’ are being asked more often. Definitely not. Simply they are faster and more skillful. So there is no need for more devices. Existing devices should be smarter.

What do you predict about the future of laptops?

Apple’s new interest, 12.5 ” screen size of the iPad Pro gives us some ideas. In my opinion, I can say that there will not be any laptops or desktop computers. Instead of computers, there will be occurred stronger tablet computers which have higher hardware capabilities than today, more functional regarding operating systems, and the hard disk on the keyboard can be attached to an external device. Therefore, when necessary, tablets are used as an immobile device, and also can be utilized mobile devices with yourself.

What kind of a business model do you have as UX services?

We just assign a full-time staff to work only for that company which came to us and totally ignorant of using this service. We give consultancy to the company about user experience through our staff. We guide the company about which tools need to be used, how they can control products or how they can improve the product.

Except this, we have a model based on a project. The company can apply to us at any process of a new product. We can test the product on any level and detect how we make a product better.

We have a design support at third place. As an example, a company which developing a new mobile application came to us and asked support for new applications. As UX Services, taking into account the concept and strategy of applications will be on stage until we complete all phases of the application’s display. However, at these processes, we do not make codification part. Therefore, at this moment, I can say that we give users experience design service.

How should be the working model with user experience development service companies?

The working model which I suggested, is a hybrid model. You improve user experience with outsourcing, but it is so important to have someone who adopts this work inside and asks right questions to the outsourced company. The biggest advantage of outsourcing is to have a chance appraising an independent perspective of product and impact of the suggestion. And ideal working method comes out when two of these become together.

What would your recommendations be to young people who want to work in this field of user experience?

There are not any branches at the universities yet. Primarily, for opening branches in a university should have a correspondence value in the sector.

I believe sections will be opened in universities related to this area in next two or three years. I can say that many universities are working on this subject. Existing industrial product design branch is the closest branch to UX field. A graduated individual from this section can work in this area. Besides, I also think that an engineer or a psychologist can work in this area too. Five years ago as a programmer, I could say that what a psychologist can do in this area but now we need to get different disciplines into this business. For a human; a psychologist or for the society; a sociologist will be the right contact to analyze behaviors.