“Compared with adults in the other OECD countries participating in the Survey of Adult Skills, adults in Turkey show below-average proficiency in all three domains assessed – literacy, numeracy, and problem-solving in technology-rich environments.” 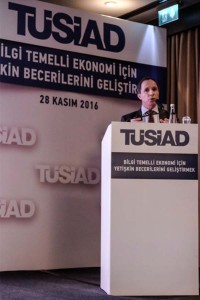 Key findings of the survey for Turkey are summarized as;

Surveys criteria and general information can be found below.* 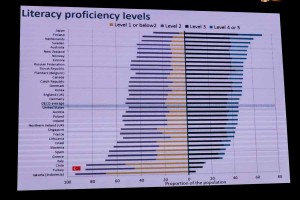 Adults in Turkey score 227 points in literacy, on average, significantly below the OECD average of 268 points. Turkey has the third lowest average score in literacy among the countries and economies that took part in the survey. Only Chile (220 points) and Jakarta (Indonesia) (200 points) score below Turkey in literacy.

The low average proficiency in literacy and numeracy reflects the relatively low levels of educational attainment among adults in Turkey. Nearly 80% of 55-65 year-olds and over 50% of 25-34 year-olds in Turkey have not completed upper secondary education. 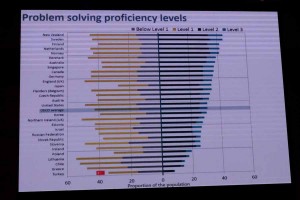 Large proportions of adults in Turkey have poor literacy, numeracy, and problem-solving skills.

As many as 45.7% of adults in Turkey attain only Level 1 or below in literacy (a considerably higher percentage than the OECD average of 18.9%), and 50.2% achieve Level 1 or below in numeracy (above the OECD average of 22.7%). At Level 1 in literacy, adults can read brief texts on familiar topics and locate a single piece of concrete information identical in form to information in the question or directive. In numeracy, adults at Level 1 can perform basic mathematical processes in common, concrete contexts, for example, one-step or simple processes involving counting, sorting, basic arithmetic operations and understanding simple percentages. 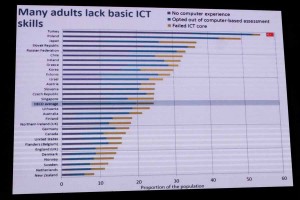 Also, a majority of adults show no or only basic proficiency in problem-solving in technology-rich environments.

Only 8% of adults in Turkey attain one of the two highest proficiency levels in this domain. Given that almost 40% of adults reported no computer experience or failed the ICT core test, the lack of basic ICT skills among a large proportion of adults may be chiefly responsible for the poor performance in this domain.

Some 38.0% of adults in Turkey (compared with 14.7% of adults in all participating countries/economies) indicated that they had no prior experience with computers or lacked basic computer skills, while 34.6% score at or below Level 1 in problem-solving in technology-rich environments. That is slightly below the OECD average (42.9%), but substantially more adults in Turkey either were not able to take the computer-based assessment or opted out of it (17.7%) compared to the OECD average (9.9%). That means that, in Turkey, considerably fewer adults with limited ICT skills took the computer-based assessment compared to similarly proficient adults other OECD countries. At Level 1, adults can use only widely available and familiar technology applications, such as e-mail software or a web browser, to solve problems involving few steps, simple reasoning and little or no navigation across applications. 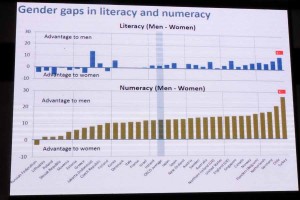 Men in Turkey are more proficient than women in all of the three domains assessed – and the difference between the genders is one of the largest observed among all participating countries and economies.

Across participating OECD countries, men and women perform equally well in literacy while men are more proficient than women in numeracy. In Turkey, men are more proficient than women in both domains. The gender-related difference in literacy is around 11 score points, and Turkey, along with Chile, Jakarta (Indonesia) and Singapore, is one of the few countries/economies where this difference is larger than 7 points. The gender-related difference in numeracy scores – 27 points – is bigger in Turkey than in any other participating country/economy. The OECD average difference is 12 points.

In Turkey, 47% of women and 29% of men reported that they have no experience with computers or failed the ICT core test, compared with 15% of women and 14% of men on average across OECD countries. 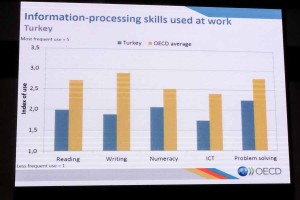 Workers in Turkey use information-processing skills at work and in their daily lives much less than do workers in other nations.

The survey collected information about the frequency with which adults use information-processing and various generic skills in the workplace. Adults in Turkey are considerably less likely to read, write, work with mathematics, solve problems and use computers in their jobs and everyday life than is the case across other participating OECD countries. But the match between workers’ literacy skills and the literacy demands of their jobs is similar to that observed in other participating OECD countries. Some 13% of workers in Turkey are more proficient in literacy than their job requires (overskilled) while 2.5% of workers are less proficient than their job requires (underskilled). By comparison, across OECD countries, an average of 11% of adults are overskilled in literacy, and 4% are underskilled. 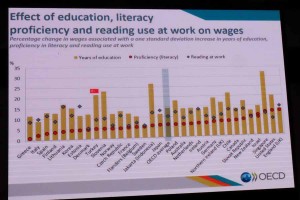 In Turkey, neither educational attainment nor literacy proficiency is associated with labor market status. But the impact of education on wages is among the strongest in all countries and economies examined.

In Turkey, neither educational attainment nor proficiency is associated with employment status. Turkey’s employment rate remains well below the OECD average, despite a rise from its pre-crisis level, while the unemployment rate remains well above the OECD average. However, the returns to education in Turkey are high: an increase of one standard deviation in years of schooling (around 3.4 years) is associated with a 20% increase in wages.

If Turkey wants to reach the goal of being one of the biggest global economies in 2023, it needs to catch the trends like Economy 4.0. Turkey needs technologically able work power to enable this target. OECD report shows clearly that today’s education system will not be able to provide that kind of resources.

The Survey of Adult Skills, a product of the OECD Programme for the International Assessment of Adult Competencies (PIAAC), provides a picture of adults’ proficiency in three key information-processing skills:  – literacy – the ability to understand and respond appropriately to written texts  – numeracy – the ability to use numerical and mathematical concepts  – problem solving in technology-rich environments – the capacity to access, interpret and analyze information found, transformed and communicated in digital environments.

Proficiency is described on a scale of 500 points divided into levels. Each level summarizes what a person with a particular score can do. Six proficiency levels are defined for literacy and numeracy (Levels 1 through 5 plus below Level 1) and four are defined for problem-solving in technology-rich environments (Levels 1 through 3 plus below Level 1).

The survey also provides a wide range of information about respondents’ use of skills at work and in everyday life, their education, their linguistic and social backgrounds, their participation in adult education and training programs and the labor market, and other aspects of their well-being.