“I believe that the impact of cryptocurrency will be as big as the web. Having no middle man in financial systems is the astonishing and powerful concept.”

Bitcoin is the first cryptocurrency that is introduced with the blockchain technology in 2009 by Satoshi Nakamoto, which is a pseudo name. Even today no one knows who he/she is or a group of people. The technology is revolutionary because it has the potential of replacing the actual financial system. Bitcoin is a digital currency that you keep on electronic devices like the laptop. You can buy & sell with traditional money and have stock markets in different countries. It is still not possible to live on Bitcoin entirely. The concept is more than financial for some of the players. Besides financial aspects they talk about the social impact of it. Some countries are confident and try to engage it with the current system, and some claim that it is a platform that underground organizations use to transfer money. They are all open to discussion, which makes it more exciting.

The only truth is that we cannot escape from it. So, let’s start talking about it.

In Amsterdam, I visited the NXT Foundation. NXT is so called the next generation of Bitcoin. I had a fruitful interview with Bas Wisselink and Dave Pearce. We talked about different perspectives of crypto-currency concept, Bitcoin, and NXT.

I hear the statement that Bitcoin tech is an experiment. What do you think? 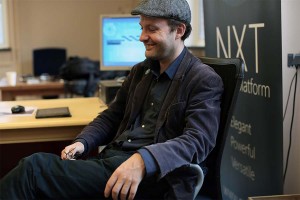 Bas: It is true that any cryptocurrency of blockchain project that you see out there is a BETA software. You see that in the numbering of Bitcoin software which is 0.12, 0.11. It is not a finished product and will hopefully never be. It is not an experiment as it is not centrally and scientifically organized. Bitcoin experience cannot be repeated, but it is an exploration. So, we are in a whole new territory. It’s a system where I can keep my bank account and pay you without anyone in between. I can put it in my pocket and cash it out in any country. That is entirely different, and it creates new dynamics between people. We’ve never seen this before, so we have no idea what is exactly going to happen. And that makes it an exploration. It’s an uncharted territory.

Is Bitcoin the new “Internet”? 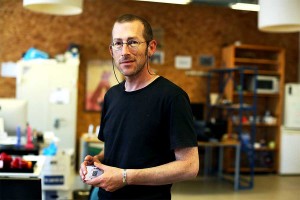 Dave: I believe that the impact of cryptocurrency will be as big as the web. Having no middle man in financial systems is the astonishing and powerful concept.

Evolution of the Bitcoin begins with trading. For a long time, even before Bitcoin, there were attempts to make it electronically. Till 2009 it had never worked out. Digital money transfer was only possible within one centralized system such as Ripple or the banks. In 2009 Bitcoin introduced a system that has no single central point, which allowed individual people directly interact with each other without needing to have a middle-man. Creation of blockchain made it happen. All transactions are constructed as a distributed ledger in the internal database within the system. That technology started to be used aside from purely financial system.

The blockchain is decentralized. How can we trust this system?

Bas: The interesting part is you trust it because there is no one to trust on the blockchain. That is also one of the hardest things to explain to a person, who is used to a central system.

People shall not work together to avoiding the so-called 51% attack. Blockchain philosophy is that there are individuals who have no trust whatsoever, who do not know each other and have no reason to co-work but are still creating something together. That is the primary cause to believe in it. In a centralized system, you also get the further problem that there is one thing to attack. If you take it down, the whole system is compromised. In a blockchain, if you attack me, I run a note, and all the others are still operational, the system continues to work as it should. It’s a system which chaos is a constructive thing.

Then, you trust the system instead of the people you are in contact.

Bas: Yes exactly. You don’t know anyone on the system ideally, and you can trust the system because the rules are transparent. You don’t need a math degree to understand the norms of the Bitcoin network. You can see how the transaction is made; you can see that by proof of work or in NXT case proof of stake. Playing a game to the system is impossible. You trust in rules, not in people.

Dave: There are millions of people with pseudo names who we do not know who they are.

We are aware their opinions from chat channels and the work they create, which is enough. Here “the identity” and how we interact with each other are redefined. The relationship is meaningful.

The rules are set between you and that person. Rules shall work out, and the transaction shall be completed successfully as agreed. Do you need to know all aspects of a person that you are lending?

It is hard to answer because the person can be a serial killer etc. but I understand that you need to get used to making business with the profiles, not real people. Sometimes even your friends cheat you.

Dave: Bitcoin is hard to explain but easy to use. Small changes can lead to significant effects. So, we do not know what this technology can lead to. In theory, there are 40-50 places in the Netherlands that you can spend Bitcoin. We usually convert CC into EUR and spend. Today you cannot live on cryptocurrency entirely. I believe that they will become more important than traditional money shortly but not completely replace it.

Bas, you transferred all your savings to CC also. I wonder your recommendations from the security perspective.

Bas: Of course it brings a lot of responsibility to carry the Bitcoin on sticks or laptop. It can be stolen, but you learn how to protect it. It’s heavily guarded and encrypted. You need to learn about encryption (your ID, hard disc, etc.) and password management.

Today people are exposed to too much information and managing their security is another responsibility. It looks hard. Or are we getting lazier?

Dave: Many people are not trained in ways of thoughts that allow them accurately assess and absorb information. It’s a little emphasis on teaching people how to think and be critical or to make their choices. Current education system still aims to produce factory workers. Today people in the society started to think and make decisions more. That is not something coming out of the educational system.

Bas: It’s possible to teach creativity. I know because I gave a lot of drama training. In the traditional school system, this ability is suppressed. It’s a fact. It’s hard to educate teachers that want creative students, which make their job harder. In the Netherlands, classes are crowded, and students are less encouraged. Most of the parents now are also badly educated, so they do not like rules. We are given a prosperous society from our ancestors. We did not make it. People say today “this is the normal state of being.” We have everything but we do not appreciate it. People are lazy to vote or educate themselves to support democracy. So, democracy is not doing as well.

I understand that we need to change the way we look things. Please tell me about the NXT?

Bas: NXT is a second generation blockchain. Bitcoin exchanges value correctly, and within NTX we add a lot of functionality like sending messages and storing data. You can create and trade assets and many other things. It is also proof of stake coin, which uses less energy than Bitcoin.

Dave: NXT is a secure electronic token. The main technical difference is PoS. We also gave the ability to create un-tokens, colored tokens, sub-tokens in the system. An asset, currency or a secondary token can be set up to use and operate in NXT blockchain. You can use those tokens in different ways like crowd funding.

Bitcoin is using Proof of Work and NXT uses the Proof of Stake. Please tell me more about the difference.

Bas: PoW can be characterized as a contest. The strongest computer assaults the cryptographical puzzle fastest. So, the more powerful equipment you have, the more Bitcoin you will mine. That leads to a large hardware race and a lot of power consumption. Proof of Stake is more like a lottery in which each coin in the system can be seen as a ticket to the lottery. The more ticket you have, the more chance you get to generate a new block. You don’t spend hardware and power on that lottery. It is an energy efficient system.

Dave: Participants put their stakes into the system, software choices in a semi-randomized way who gets the reward next. NXT has 1 billion tokens. That is the way Proof of Stake works to ensure the trust in the system.

So, it is easier to use.

Bas: It is not much easier but cheaper.

There are many alternative cryptocurrencies at the moment, how does the end-user decide which one to pick?

Dave: It all depends on your taste. There is no reason to choose one over the other.

I thank both of them very much for widening my vision.

You can watch the interview in English with Bas Wisselink from NXT Foundation.