A remarkable event was left behind. We watched presentations from programmers who are 8-14 years old in a lively chirping Hall.

Which activity did you hear ‘NO’ when narrator asked ‘Are you ready?

‘How did you find a chance to do the coding?’ The answer to the question was’’ We got our lunch in the other recess the lunch break? So we allocate the longer the lunch break. ‘

Everything will be confined when we are such natural and disciplined as children.

I congratulate all organizers, contributors, and coders from my heart.

Do not forget to watch videos below!

Let’s move on to the event’s official news.

IT geniuses of the next generations who will carry Turkey to a top league in the field of information technologies competed in the “Kodu Cup Turkey 2016” with their innovative and amusing games they have written in a simple and visual programming language named Kodu under the theme of “Me and the Environment.”

The finals of the “Kodu Cup Turkey 2016” organized by Microsoft Turkey, Finansbank, and Habitat to encourage children for code writing was achieved. The teams formed for 8-14 years old children from all over Turkey competed by their games are written under the theme of “Me and the Environment” to be in the first three.

165 teams from all cities of Turkey attended the “Kodu Cup Turkey 2016” with 165 different amusing and innovative games. After the eliminations, five teams in the 8-11 age category and five in the 11-14 age category succeeded to be in the first 5 and gained the chance to compete in the finals together with their families.

It was very exciting to view the teams trying to introduce their games within a limited time, and it was indeed tough for the jury members to make their preferences. Finally, Temel Güzeloğlu, General Manager of Finansbank, Murat Kansu, General Manager of Microsoft Turkey and Sezai Hazır, President of Habitat announced the first three and presented them their awards.

You can watch an interviews with teams and event details, award speeches in Turkish below.

Touching a child is, touching the innovation leader of the future.

Temel Güzeloğlu, General Manager of Finansbank, stated that they are focusing on children throughout their studies in the fields of social responsibility and their aim is to present them several contributions using education, science, and art. Güzeloğlu also mentioned that along with their cooperations with educational corporates for organizing musicals and plays, they had established a mathematics exhibition in “The Zone by Finansbank.” He also expressed his happiness to entertain all these children on the stage of the Finansbank Meeting Hall. Güzeloğlu also explained that his son could not participate in the finals of the “Kodu Cup Turkey 2016” which is a part of the “Tiny Fingers Programming The Future” project, mentioning; “I too have a son at your ages. As a rule, being a member of Finansbank, he could not participate in this competition but, I enjoyed the same excitement as if he was in the games as well”.

Güzeoğlu further stated that “We believe that, touching a child will be touching the innovation leaders of Turkey” and continued:

Using our “Tiny Fingers Programming The Future” project, we have achieved by the cooperations of Microsoft Turkey and HABİTAT. We are trying to improve the skills of the children for their literacy of technology which is the essential of our century and we are planning to support their developments by teaching them algorithmic thinking methods. In 22 various cities, we reached around 5.000 children at 8-12 ages and in 16-hour sessions, taught them a straightforward and visual programming language Kodu by which they can design their games. Our “Tiny Fingers Programming The Future” project has already achieved its targets in the first year. It will continue in the new year as well, but, to attract the interest of children for code writing, as the three corporates walking on this path, we organized the “Kodu Cup Turkey 2016”. I have to mention about our pleasure for the hopes of a better future after witnessing the interest and participation in this contest which is open to all children between 8 to 14 ages. Today, these kids presented their skills in a real excitement, and I am confident that it will not be so difficult to transform Turkey into an international center of Informatics by these bright young brains equipped with bright ideas. Therefore, we shall continue to support all these children walking on this path.

Murat Kansu, General Manager of Microsoft Turkey, expressed his pleasure for being a part of this meaningful activity. Kansu explained his views regarding the “Kodu Cup Turkey 2016”: “In old days, we used to say, ‘early bird catches the worm’ but now, like Microsoft, we say, ‘early codes win the game.’ When we talk about the industrial 4.0, then we have to introduce the youngsters who will form our future, with code writing and algorithmic thinking at their very early ages so that we can transform into industry 4.0 more rapidly. Half of our population is young, and we have more than 10 million students all over the country. Therefore, it is considerably important to prioritize code writing and make it a fundamental part of our education system to achieve the 2023 targets of Turkey”.

Coding, which is the language of software must start at childhood.

Kansu stated that there are around 5.000 graduates from Computer Engineering faculties all over Turkey and continued: “This number is not sufficient to meet the potential of Turkey. Estonia has a population of 1,3 million whereas they have 4.000 graduates every year. Therefore it is essential to start at earlier ages. As I mentioned before ‘early codes, win the game.’ Learning code writing at early ages which are the language of software, will add great value.

Nevertheless, as stated by the President of the USA, Mr. Barack Obama, the “Computer Science For All Initiative” one of the primary purposes of this initiative was to give all students at pre-university levels computer lessons starting with code writing. They spared a budget of 4 billion US Dollars for this purpose. I am glad to mention that studies have already begun in Turkey to put coding lessons in the syllabus of primary, secondary and high schools as well.

The code is essential for algorithmic thinking.

Emphasizing on the point that it is not an easy skill to learn computer programming, Kansu explained the following: “Starting to learn the basics at early ages and following a course starting from the easy towards the difficult may lead you to become a programmer. If you start such an education at early ages and continue this type of teaching throughout your life, we observe that your algorithmic thinking skills improve, and you may use this power in every aspect of your life. “Kodu Cup Turkey 2016” was a terrific competition which crowned the first year of our “Tiny Fingers Programming The Future” project. We announced this contest in April for children at 8-14 ages and by the end of May, all competitors were ready. The students formed teams of 3 and competed in their games. Taking this opportunity, I extend my sincere greetings to all participating children and the winners.

Sezai Hazır, President of the Habitat Association, emphasized on the synergy between the partners of the “Tiny Fingers Programming The Future” project which was the core of this success. He further pointed out that: “The regional collaborations are an important aspect of this project which we carry out in 22 different cities. We have developed remarkable collaborations with the public bodies, as well as local administrations. Till today, we have already educated 130 volunteer tutorials in these 22 project cities. With the collaborations we have established, we taught more than 5.000 children the 16 hours KODU Game Lab courses. 200 financiers from Finansbank in all 22 cities volunteered for this project, and 75 of them took an individual 16-hour course and became tutorials to teach the children.

You can watch an interview with Cavit Yantac  Deputy General Manager of Microsoft Turkey in Turkish below.

Awards are for the Environment! 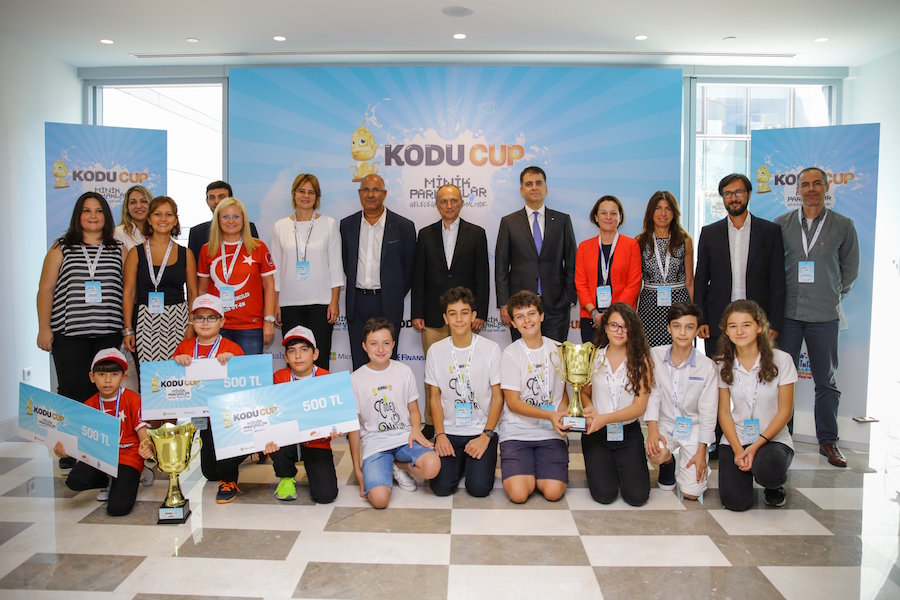 Teams winning the first prized received their cups along with a cheque of 500,- TL each and the second and third prize winners were donated with medals and checks of 250,- TL each.