Audi City Istanbul, where the visitors can get any information related to the Audi world and can see the virtual versions of all Audi models in the exact sizes, is now open in İstinyepark.

The visitors of Audi City, which is opened in Istanbul following London, Beijing and Berlin, can obtain more customized consultancy services related to millions of colors, hardware and model options from Audi experts.

The fact that 11 experts provide service in a 100-meter square field proves the importance given to this concept by Audi. In the opening, the high rate of visitors of İstinyepark is mentioned, and it is told that a benchmark will be created for the future related studies. It is true that an environment where all the details of the technology are sensed has been created.

Explained by Audi A.G as “showroom concept” of the future, Audi City combines the design and operation model, the current and upcoming related sales methods with the best dimensions of the digital virtual world. Not only a technological infrastructure as a virtual showroom but Audi City also provides a more customized customer consultancy service.

Audi City presents all the model series of the brand in an entirely digital manner. By utilizing innovative media technologies, Audi City enables the visitor to customize the automobiles by making a selection among millions of options and to experience them in a realistic manner with 1:1 scale ın the digital screens from floor to the ceiling.

“Istanbul is now a digital town!” 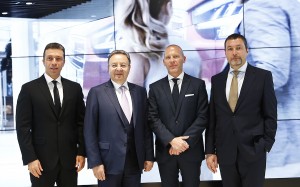 The fourth of Audi City concept – the first one of which was opened in 2012 in London – is opened in Istanbul İstinyepark with the ceremony in which Audi A.G European Executive Sales Director Dominique Boesch, Doğuş Otomotiv Board of Directors Chairman Aclan Acar, Doğuş Otomotiv Chief Executive Officer Ali Bilaloğlu and Doğuş Otomotiv Audi General Manager Gino Bottaro participated.

Stating that Istanbul is the town, which has been longed for and planned for Audi City, Dominique Boesch says that Audi City Istanbul –being a high tech product- has a great importance for the brand. Emphasizing that Istanbul is in compliance with the definition of “digital town” with its mobile Internet usage rate over the global average in addition to the very dynamic and young population who lives in there, Boesch expresses: “With all these reasons, Istanbul is an ideal place for the new phase of our efforts in connecting the Audi sales network into the digital world.” Boesch also adds that Istanbul is empowering its position of being a regional meeting point for touristic, cultural, innovation and technology related issues and as Audi they are following this situation very closely. He points out that Turkey, especially Istanbul, is one of the unique and targeted towns for Audi.

“Audi City will be a benchmark for other countries.”

Explaining that Turkey is the country which response fast to the technological infrastructure establishment and optimization of Audi A.G and which implements the application in the quickest way, Doğuş Otomotiv Audi General Manager Gino Bottaro says “We have used and improved several technological investments by Audi particular to Turkey in the best manner. Therefore, the studies by Audi Turkey have become a benchmark, and they are shown as a role model for several countries.” Bottaro adds: “Currently, Doğuş Otomotiv-Audi is the first distributor country to have Audi City. That is because we are entirely digital from sales to after sales services and to marketing and we live future today.”

Working as a vendor

For Audi brand, Audi City is functioning as a vital innovation laboratory of digital technologies on sale. Audi now is getting ready for taking the step of including digital showrooms into the international vendor network. 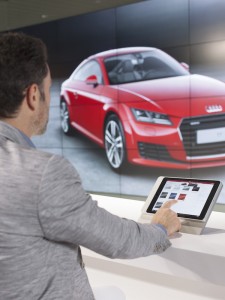 The brand is systematically improving the Audi City technologies for them to be ready to use also in the traditional vendors. In the long run, the Audi vendors can implement the modules like “multiple sales solution” (MMS) for model configuration, “digital LED walls” for automobile introductions and “customers’ hall” for receiving consultancy services in a more private environment one by one into their stores.

The Audi City concept – the first one of which was opened in 2012 in London, later on, was put into service in Beijing and Berlin. Audi foresees to open up Audi City in other global towns such as Paris, Washington, and Toronto in the next years.

You can watch an introductory video of Audi City Istanbul below.